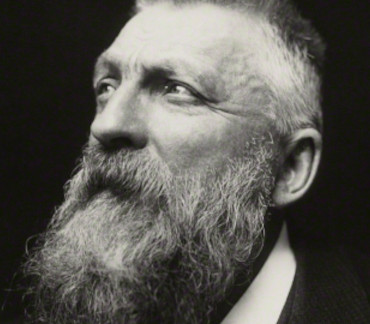 "François Auguste René Rodin was a French sculptor and is generally considered the progenitor of modern sculpture. His early unconventional sculpture ""The Man with the Broken Nose"" (1864) illustrated the ""unfinishedness"" that would characterize many of Rodin's later sculptures. A commission to create a portal for Paris' planned Museum of Decorative Arts was awarded to Rodin in 1880. Although the museum was never built, Rodin worked throughout his life on ""The Gates of Hell"". It comprised 186 figures in its final form. Many of Rodin's best-known sculptures started as designs of figures for this composition, such as ""The Thinker"", ""The Three Shades"", and ""The Kiss""."