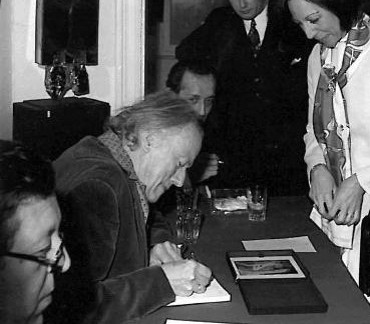 Delvaux’s paintings became famous for usually feature numbers of nude women who stare as if hypnotized, gesturing mysteriously, sometimes reclining incongruously in a train station or wandering through classical buildings. Sometimes they are accompanied by skeletons, men in bowler hats, or puzzled scientists drawn from the stories of Jules Verne. In the late 1950s he produced a number of night scenes in which trains are observed by a little girl seen from behind. These compositions contain nothing overtly surrealistic, yet the clarity of moonlit detail is hallucinatory in effect.